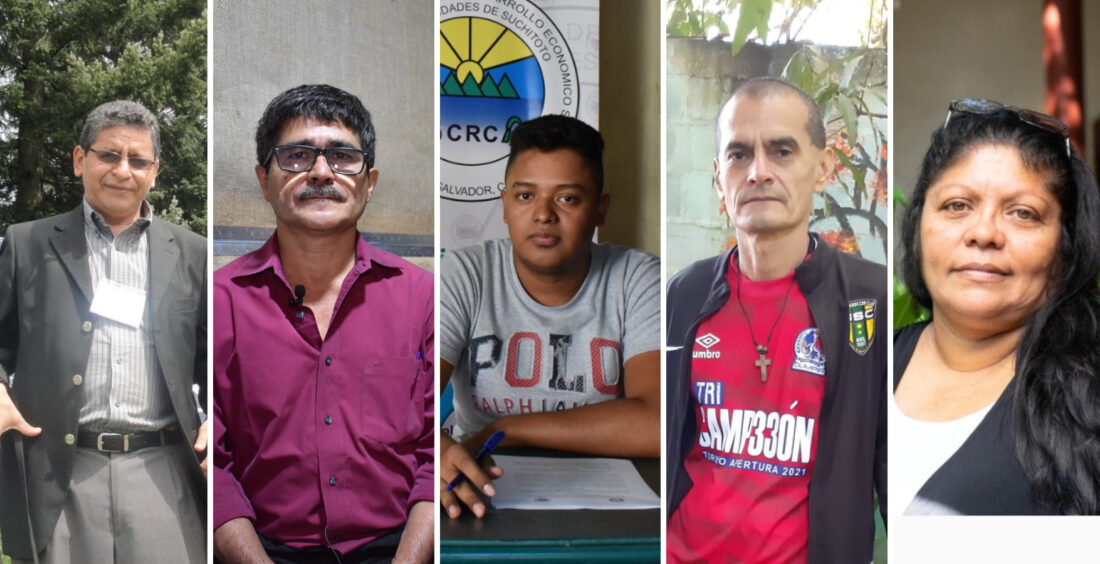 Companion Community Development Alternatives (CoCoDA) was established in 1992, as an extension of the work of Building With the Voiceless of El Salvador (BVES) which was founded by Tim Crouse and Peter Melberg (of DePauw University) in the United States alongside Salvadorans such as José Peña.

The success of CoCoDA has always been due to the commitment to having Central Americans and North Americans working side by side in an effort to build not just a bridge, but a strong and equitable one that allows people to weave friendships.  Together, we’ve worked for sustainable development in our communities and to waking North Americans to an awareness of the responsibilities that come with privileges and resources.

This foundation requires deep and long relationships.  We want to share the names, faces, and stories of the leaders that make our work successful.

Vilma Coreas is currently the Administrative Coordinator of the Suchitoto Midwives Association “Rosa Andrade” which was founded in 1994 and has been one of our partner organizations since 2013. In that year, CoCoDA started to bring medicine students from Indiana University to El Salvador to give them knowledge about the public health system in Central America.

The Midwives Association has been an important partner in exposing these students to know the realities of pregnant women in the communities.

Vilma´s life trajectory is impressive.  As is the case with all the midwives in the Association, she began this voluntary work in times when access to health care was very difficult in the rural communities.

Her first experience as a midwife came from her mother’s need to give birth. She recounts it as follows: “Look, there is no one to attend to my brother’s birth. She told me, “You are going to help me with the child that is going to be born, you’re going to put your hands in, grab it and bundle it up since it is cold. I didn’t know what to do, but I had to receive my brother.”

In 1987, Vilma was also one of the founders of the Cuscatlan´s Repopulate Committee, now known as the Committee for the Reconstruction and Social and Economic Development of the Communities from Suchitoto (CRC), when she started her training as a health promotor without a salary.

Besides her job as a midwife, Vilma is a member of the Concertacion, running and organizing a group of women to get loans under the program “Espera”.  This is a program that also addresses the economic violence that women often go through.

CoCoDA is proud to have allies like Vilma that are committed to the development of the communities through the empowerment and attention to women in the social sphere.

Edgardo Perez is the current president of the Committee for the Reconstruction and Social and Economic Development of the Communities from Suchitoto (CRC), CoCoDA’s oldest partner in El Salvador.  Edgardo is 25 years old and from the Community Valle Verde, one of the communities unionized and re-established by the CRC.  CoCoDA began it work in Valle Verde before Edgardo was born.

“I grew up in a context of strong local leadership assisting in the development of the community.  Therefore, I have a strong connection with the community and Suchitoto.”  From a very early age, Edgardo developed a very strong feeling of responsibility, which involved him in community organizing.

Edgardo was one of the founders of the Association of Credits and Saving, which aids community members in establishing a saving account, to purchase and sell farming products that they themselves grow such as corn, sorghum, and sugar cane, among other things in order to develop and boost the community economy.

Edgardo has been a member of the board of directors as a receiver as well as the secretary of Valle Verde community board and a member of the community cooperative, “El Chaparral de RL.”.  He was also appointed to the treasury of the youth committee from his community for 6 years.

In addition, Edgardo is a member of the Reconstruction and Development Salvadorian Foundation (REDES), a founding member of the Global Platform Association, and a member of the Institutional Committee from the RAMSAR.  After being part of all these organizations, in April 2021, he was elected the president of the CRC.

While Edgardo’s engagement in his community and its surrounding communities is impressive, it is not unique.

Edgardo is one of the many Salvadorans who have taken seriously their responsibility to improve the quality of life of their country.  After watching his elders rebuild the community of Valle Verde, he has followed in their footsteps and taken on their mantle.

Antonio Pacheco is one of the 26 founders and the current president of the Association for Social Economic Development (ADES), another of the oldest partners that CoCoDA has worked with in Central America since 1992.

Alongside Chico, as we affectionately call him, CoCoDA has collaborated with ADES in their aim of solving problems that were triggered by the armed conflict in El Salvador.

This collaboration began through an education program with scholarships for teachers of the Popular Schools, projects such as the Santa Marta Health Unit, the community radio ‘Radio Victoria.”, the purchase of land for the radio station, the purchase of land for communities, and much more. CoCoDA and ADES have worked together on water projects in Valle Nuevo,  El Zapote, as well as the construction of a solar-powered water system based in the El Rodeo community.

In the area of ​​education, CoCoDA helped ADES fulfill one of the dreams of their youth.  CoCoDA contributed over $80,000 to the purchase of the Casa Iván Villasboa, which provides free lodging for young people who travel to San Salvador from the communities to complete their university studies.

Chico says, “Supporting these efforts is sowing a seed for the future.”

Freddy Flores is the coordinator of the Nicaragua Community Movement (MCN) and our partner in Nicaragua. Since CoCoDA started its relationship with the organization six years ago, Freddy has been the person with whom we have direct communication, and he facilitates the process and administration of the projects we work on together.

Freddy is a local and national reference for the MCN where he has worked for the last 18 years.  He has had different responsibilities during those years, from being a health promotor, technician, administrator, member of the board of directors, and for the last 8 years as the project director.

“Starting to work with CoCoDA was a challenge because of all the new things that involved, but having this relationship has been something positive for the respect, the solidarity, and the development that it brings to the communities,” says Freddy.

As an organization, CoCoDA is honored to expand its projects and work with very committed organizations like MCN with education programs like scholarships, water, health, and composting latrine, among other projects with the purpose of improving the living conditions of our partner communities.

For Freddy it is fundamental “to continue working and to continue expanding the programs” and in CoCoDA we share his vision.

Javier Martínez is the current president of the board of directors of the Salvadoran Reconstruction and Development Foundation (REDES). It is his third time in a management position in REDES, after some time away in public work.

“The foundation has been part of my life. I was part of the board of directors, and I was also the executive director for four years before leaving for other work. I have dedicated half of my life to the Foundation”.

Javier recalls, “The history of REDES and CoCoDA dates back to the beginning of both organizations when REDES worked with “Building with the Voiceless” and then it turned into CoCoDA.”  Javier remembers traveling with the founder of CoCoDA, Tim Crouse, to Indianapolis, Washington DC, and Chicago and meeting Iván Villasboa, who would later replace Tim as Executive Director.

The bond between CoCoDA and REDES is more than about running a program.  According to Javier, it is about being partners in the process, and partners in the areas of emergency and risk management.

Many times REDES and CoCoDA responded with emergency activities that were carried out due to the earthquakes, hurricanes, etc. that impacted El Salvador.

In the same way that CoCoDA has a strong feeling of commitment and friendship for REDES, it is the same for Javier.  He says, ‘it is very important to continue to work in this historical relationship, first as partners running projects and in our commitment to the process, beyond a particular project”.